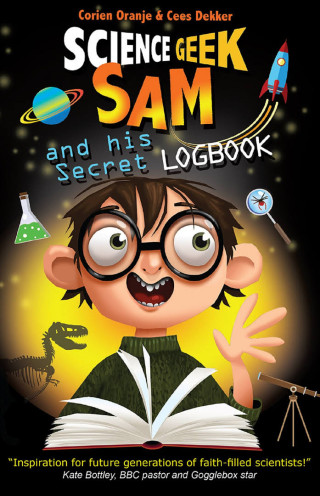 Sam has questions. About the Universe, the Earth, God and well…everything. This is his secret (no so much anymore) logbook of discoveries and unsolved mysteries.

Originally written in Dutch by children’s writer, Corien Oranje and physicist, Cees Dekker. It was reviewed highly by both the secular and religious press throughout the Netherlands. English language rights were negotiated and acquired for Lion Hudson from the Dutch publisher Royal Jongbloed. Contracts signed and translators, editors and illustrator were commissioned. Though already containing black and white line illustration, the UK publisher wanted to add more for the English edition.

Apart from all the normal challenges of children’s literature in translation, such as cultural colloquialisms and kids’ slang, one of the editorial challenges was to ensure the authentic logbook nature of the original content and layout remained. This required all the QR codes and URLs within the body of the text to be researched and replaced with new English language information websites and Youtube videos. The nature of this book also required the translator to be fluent in Dutch and English, ‘get’ children’s fiction and have a fairly decent knowledge of science and theology. Miracles do happen, because we found Petra Crofton-van Rijssen! She and a supporting translator, Sophie van Houtryve did a fantastic job. They, and commissioning editor, Lynne Humphreys stayed in close touch with the Dutch authors throughout the project.

Translating a title into English from a European language is a gateway strategy as it provides the opportunity for international publishers in countries from Korea to Brazil to acquire their language rights, and use the English edition to translate from. We’re sure the authors will see this title go around the world.