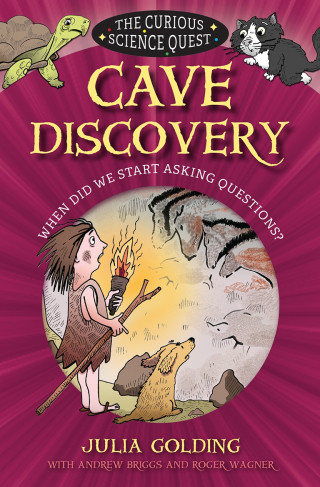 When did we start asking questions?

Harriet, Darwin’s pet tortoise, and Milton, Schrodinger’s indecisive cat set off on a time-travelling quest of discovery, unravelling scientific exploration and religious beliefs and how they fit together. Throughout the centuries humans have been looking for answers to BIG questions – how did the universe start? Harriet and Milton start their investigation trying to discover when humans began asking these questions. First stop on the quest is cave paintings – who did them and why?

The Curious Science Quest is an illustrated, non-fiction series for ages 8+ commissioned as a six book collector set. The original concept grew from an academic title published by Oxford University Press The Penultimate Curiosity  Authors, physicist Andrew Briggs and artist, Roger Wagner decided to put their years of learning and exploration engaged for this title into an idea for a set of children’s books. Who better to bring it to life than award winning fiction writer, Julia Golding! Originally planned as pair release over 18 months, this is the first title.

The creative team felt the illustrations needed to be humorous line drawings that gave fun and silliness to characters ranging from Aristotle through the centuries to eminent modern-day scientists such as Diane Fossey and Stephen Hawking.

Illustrator Brett Hudson’s early sample cat and tortoise sketches of Harriet and Milton (our two main personalities) revealed the warmth and wit that Julia had given them in her text. Publisher, Lion Hudson continue to publish the series and Cave Discovery’s companion title, Greek Adventure pushes the quest on to new discoveries.